Given that my last few topics have been a little heavy, I figured it was long since time to talk about something that I love and that fascinates me, inspires me, confounds me, and frustrates me in equal measure.

I have written about mead. Today is about beer.

From Bad Grain to Booze

The prevalent theory for the invention of beer has been dubbed the “Accidental Fermentation” or “Spoiled Storage” theory, It goes like this:

Grain got harvested.Grain got stored.Grain somehow got a little wet and the bread tastes kinda sour.Shouldn’t waste it- just use it anyway.Wow, I feel awesome.

As I mentioned some time ago, there is an ongoing debate as to what the first fermented beverage was. Mead, being made from honey, seems to be the frontrunner given that the availability of sugars to water in honey makes the “accidental fermentation” theory considerably more likely. Grapes need to be crushed to become wine, and grain needs to be milled and made into wort (a hot “tea” of water and grain- beer prior to fermentation.) For mead? Just take wild, unpasteurized honey, add water, and wait.

We’ve cleaned up processes considerably since than, but the method still works- especially with the eventual addition of hops, which function as a bittering agent and possess antibacterial properties that control unfriendly infections.

Ancient cultures (most famously the Egyptians) managed to pull off an accident on purpose and made beer a common part of their lives- it even found it’s way into their mythology. In Mesopotamia, the first beers were discovered in connection with baking bread, and crude beers were consumed directly from large urns- essentially, the unfiltered wart underneath the soaked and spent mash (the milled grain that gets fermented.)

Something as simple as accidental fermentation is bound to get around, and all over the world cultures either discovered a beer-like beverage on their own, or tasted it through trade and managed to come up with a local flavor. Today, the styles of beer are as varied as the people who make it (and drink it.)

Just like in baking and cooking, any number of elements in the making of beer can drastically change its flavor, color, and presentation: 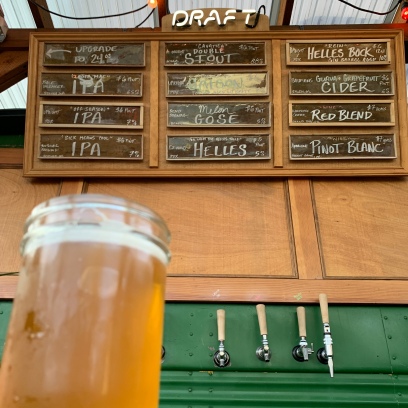 My own love of beer came pretty late, along with my enjoyment of most alcohols. My first attempts at beer were the cheaper, domestic brands that my parents tended to enjoy and that were available at college parties. After a little education and curiosity, however, I quickly found a veritable world of flavor, chemistry, history, and geography waiting for me after a quick birthday check.

Over time, I even began to notice which styles I loved the most- and I continue to find new and interesting ones. Some of my favorites so far are:

Even from its birth, beer and baking were connected when some nameless farmer couldn’t quite get a decent seal on his storage jars. In medieval communities, it was apparently common for bakers to do double-duty as brewers, since fermentation doesn’t exhaust yeast. When a barrel of beer was finished, the dregs would be scraped out and used to make a starter for future loaves of bread (something I tried to replicate in culinary school, without success.)

Want to try it for yourself? Here’s a simple recipe to get you started!

In a bowl, whisk all of your dry ingredients together well.

Pour in your beer and mix well. Fold in your additions! If you are using a chocolate stout and want to make a chocolate bread, I recommend replacing 2 tbs of flour with cocoa powder. If you add berries or chocolate chips, coat them in a little flour first to prevent them from sinking to the bottom during the bake.

Bake for around 55 minutes, or until a tester stuck in the middle of the loaf comes out clean!