Good evening, friends and neighbors.​I don’t have a mental diagnosis- but I probably should. How is that for a starter? 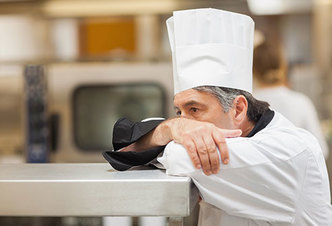 Working at the cafe, no one “just cooks.” All of us have our tasks that help the bakery keep running orderly. For me, after I finish my day’s production, at least once a week I scrub down the work tables and wipe down the bins. I organize and tidy the pastry supply shelves, and rummage through our part of the walk-in fridge- chucking out old stuff, condensing good stuff so it takes up less space and frees up containers.
​
This is called “side work”- everyone in the industry does it, and I don’t know a single person that really enjoys it. Yet it gets done, week after week, and shirking on it incurs the wrath of everyone who doesn’t.
Side work is the gross, slimy, unpleasant stuff that isn’t part of YOUR job, but it’s part of THE job- and it has to be done.

Or this happens. Pic from healthinspectorsnotebook.blogspot.com

I’ve written before about the dark side of the culinary world– how wildness, misbehavior, and self-mortification are traditionally glorified in kitchen culture. For chefs, the “auteur” myth is alive and well- that true genius is found somewhere between madness and pain, and that cooks to can keep themselves hovering in this limbo are the ones truly touched by the gods.

They don’t sleep. They are obsessive. They are awkward outside the kitchen, and a force of nature when at work.

Many of my favorite writers and cooks lived this lifestyle. Generations of young cooks and I aspired to it.

It would kill us, if we let it.

The other day, I read this article from a chef about how he realized he wasn’t handling the lifestyle well and that he might need help- that he might very well be depressed and need medication.

It was a tough decision for him- tougher than it ever should have been. Taking a regular medication for a condition meant you couldn’t hack it. Not hacking it meant you were weak and a liability in the professional kitchen- let alone the stigma attached to mental health issues elsewhere. Eventually, he was honest with himself and got the help he needed- finding it not only improved his life in the kitchen, but outside as well.

Self-care is a vital part of living that often gets nudged to the side. Especially for those of us with stressful occupations, it not only goes by the wayside but often replaced with other unhealthy behaviors- alcohol, drugs, obsessions, addictions, anything that will dull the pain we carry and help us forget that something is deeply wrong.

Photo by Nathan Cowley on Pexels.com

Facing these parts of our lives are unpleasant. They are uncomfortable. We don’t like to feel weak. We don’t like to admit we might need help- that we can’t hack it on our own.
It’s gross and unpleasant, but it needs to be done. It’s our side work for ourselves- and too many of us let it slide for too long. We idolize people who keep functioning in the mess they make of their lives- and we have the nerve to be surprised and saddened when one of us lets it go too far and “shut themselves down-” permanently.

I got a BA in Psychology before I became a baker, which means I know just enough to know you should never diagnose yourself. I did see a therapist for a time a few years ago after a rough break up and before I started losing weight, but since then I haven’t seen one.

I probably should. I maintain healthy-enough habits to manage and reduce stress: hobbies outside the kitchen, exercising, writing. All the same, I owe it to my craft, to my wife, and to myself to acknowledge when things are getting too rough and I need a hand.I don’t complain when I have to scrub down a steel table. Scraping forgotten food out of a Cambro isn’t a problem either.Making a call, sitting in a chair, and talking to someone about my life shouldn’t be nearly as rough as that. We really need to stop acting like it is- and not let others feel the less for doing so.

It’s okay to not be okay.

3 thoughts on “Doing Your Side Work”