Back in culinary school, I quickly learned that the single most useful tools a student can have on them at any given time is a pen and a notebook.
Especially in my Soups, Stocks, and Sauces class, a.k.a. Hot Foods 101.

My chef for that class was a fun and pleasant guy, but tended to have something of a short temper and a dry sense of humor. When we got into the kitchen for the practical half of the day’s class, he would have EVERYONE’S production scrawled up on a chalkboard.

He would then rattle through it, top to bottom, along with recipe specifics that group must know. Then he would erase the board- and he wouldn’t answer ANY questions for the rest of the day that amounted to “What else was I supposed to do again?”

I learned VERY quickly how to jot down notes, written in my own flavor of shorthand, and to create mnemonics for myself each day to make sure that- once the board was erased- the only thing I had to say was “Yes, Chef.”

The little flip notebooks I filled didn’t just help me that day- I often used them to scrawl down recipes and procedures my chefs described, or later on to sketch quick plating ideas. Those saved ideas and recipes got compiled in a little bound notebook with a magnet closure- and never got too far from my knife roll or chef uniform. 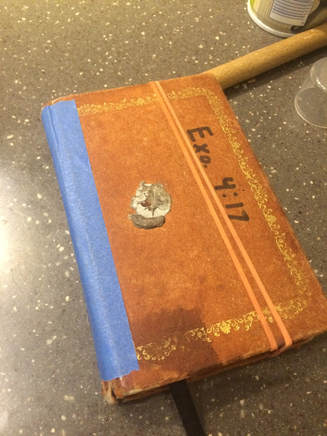 Three years after I started speed-scrawling in my little notebooks, I was in the kitchen of my final class of culinary school. My chef asked me and my little dessert team what was going to be on the menu. I reached into my back pocket and pulled out the little notebook, flipped a couple pages, and said “Carrot Cake with Cream Cheese Icing. The special roll in the bread baskets will be slices of beerbread.”

The chef nodded and eyed the little book. “Ideas?”
“A few, Chef- mostly recipes I know will work.”
He grinned and clapped me on the shoulder. “You’re gonna do just fine, Matt.”

That was several years ago now. That same little book still resides in my knife roll pouch. It’s gotten more than a little threadbare. The binding is falling off, and it’s held closed with rubber bands- the magnetic closure long since torn off.

My faithful little book shall not last forever- whether it runs out of space or crumbles first.

Recipes are interesting and unique things. They come in books, magazine pages, index cards in the handwriting of a loved one- or scrawls of desperation on little notepages.

Despite the obvious need for reproducibility (the ability for a recipe to produce the same result over and over again, regardless of who is making it,) all recipes have an element of their cook in them, and some things that change the dish don’t make it into lines. In that respect, part of a recipe dies with the person who wrote it- but we save what we can.

Soon after my grandmother died, my father and uncle began going through her estate. One night, while I was at my parent’ss house, my father came in clutching something wrapped in a towel and two index card boxes. He handed me the bundle and set the boxes down on the kitchen table.
“Matt, this is yours, but your uncle wants those. Get busy, because I need to bring them back.”

The bundle was my Bubba’s kitchen witch, and the boxes were full of her recipes. I whipped out my phone and started snapping pictures of every card with an even-remotely-remembered recipe on it.

Her Corn Pudding that showed up on every family dinner table. Her Jewish Apple Cake that I now sell at the cafe. Her Banana Chocolate Chippies that she’d give me as a kid, and a host of others.

When I got back to my place, I transcribed them for my sisters and cousins.
It’s a few more chunks of her kitchen we could take with us wherever we went. 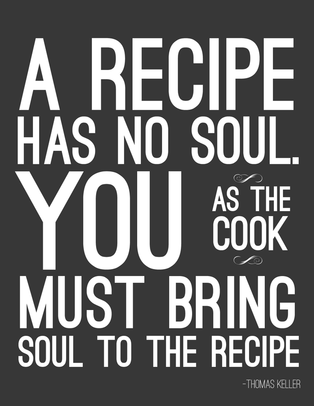 Recipes have, most famously, been preserved with cookbooks. According to Bee Wilson, author of “Consider The Fork,” instructions for making different foods date back at least as far as language.

These were rarely written for, or even BY, professional cooks though- they were often written by people to instruct kitchen servants in doing, such as a medieval recipe we have for Twice-Fried Pancakes complete with instructions like, “Beat the batter continuously with a bundle of birch twigs, sufficient to tire out two strong men.”

Even then they knew that what makes food taste good is the cooks blood, sweat, and tears.

Other times, food was folded in with instructions for traditional medicine, such as in the Chinese manuscript “Yinshan Zhengyao,” written by Hu Sihui in 1330 CE.

Like any industry, methods of documentation were eventually formed for professional cooks and bakers to communicate with other professionals. Bakers percentages were conceived to streamline remembering general formulas, with the procedures considered already known.

In general, when it comes to recipes, pros need certain things clarified that your average homecook doesn’t:
– Does it work? (i.e. Is the recipe sound, and will it make what it says it does?)
– Is it reliable? (i.e. Will it ALWAYS work, or are there certain conditions I can’t control that make it work? If there is, get rid of it or note those differences)
– Is it easy to scale? (I need to be able to figure out how to take a 4-serving batch and make it 400 servings quickly.)
– Are there special instructions/ equipment to use?

In order to answer all these questions as quickly and easily as possible, there is a set style of documentation that I’ve reproduced for my own notebook: 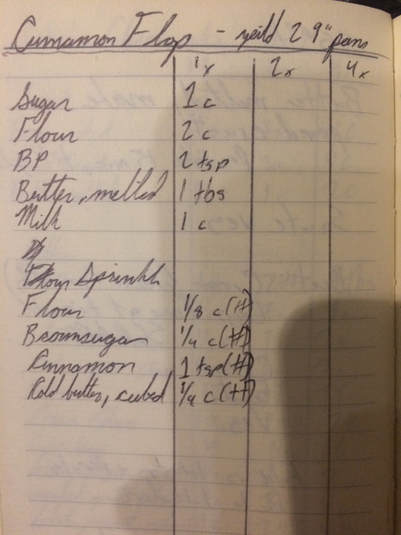 After each recipe, I’d include the MOP (Method of Production, a.k.a. directions), and try to leave room for additional notes/margin scratchings I might need to make. The downfall of pen and paper, however, is right there- I need room to make edits and notes. Recipes- even proven ones- get tweaked and repeated constantly to make them better. Cooking, after all, is a science- and science requires iteration. While it’s splendid to have a “paper trail” of drafts, it’s certainly helpful for those drafts to be legible!

“Whisk in eggs one… with thyme…till chromey? I don’t remember being drunk at work…”

With the rise of smartphones, of course, there are plenty of recipe book apps that make all this easier, with the (usual) bonus of not having a page limit. Some of these apps will help you scale a recipe, work out the nutrition information, or even import recipes from foodie websites and convert them into their format.

Well, it’s certainly one excuse for why you are on the phone in the kitchen.

“Aw jeez! I was just looking up a recipe! AND THAT’S MY BRULEE TORCH!” Gif from Gizmodo
Of course, the failure of most of these apps is losing that paper trail of drafts- once you edit a recipe, unless you have a rather good memory, it’s harder to look back and go “Hm… maybe I needed that extra flour in there. Crap, what was that measurement again?”
​
For quite a while I’ve used a simple but effective app to hold on to the majority of my recipes called Handy Cookbook.
Unfortunately, it’s rarely updated anymore and soon won’t work with later operating systems, so I’ve been on the prowl for a new one. I’ll be honest, I’ve rather gotten used to using the app for scaling up recipes- particularly when I bring favorites from home into work. Of the other cooks- professional or otherwise- that I’ve talked to who keep their recipes electronically, most use services like Google Drive or iCloud Photo to hang on to them and load them up from anywhere.
Only problems I can see with that is data usage for getting your recipes if you don’t have WiFi available and needing to do the scaling math by hand- though I imagine it’s good to keep in practice. 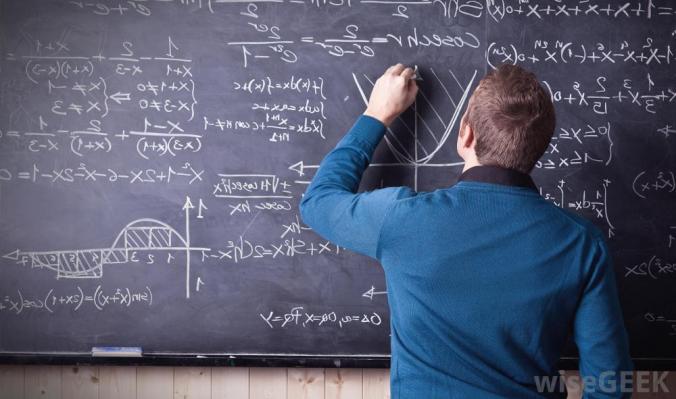 See, algebra is good for SOMETHING! Pic from wiseGEEK

Even after I find that perfect app, though, I’ll probably still hold on to my little notebook. It has character, is MUCH less likely to get me in trouble for having out at my station. Besides, cellphones and large buckets of sanitizer / muffin batter are not a good combination.

Not that I know from experience, of course.