​Fall in Portland is a bit schizophrenic.

Emily and I were hoofing it against the stiff breeze down Burnside, still trying to reconcile the warm weather earlier in the day with the fact that we were both now scarved, gloved, and double-coated. Darkened windows of houses and apartments leered in from opposite sides of the busy road- there was a threat of rain.

“So what are we going here to try?” Emily suddenly pipes up, her hands deep in her coat pockets.

“I was told they have a Fernet-Branca Chocolate Pie, and there are interested parties that want to make it for themselves,” I state matter-of-factly.

“I hope they have friggin’ seats that AREN’T outside…. oh good, doesn’t look too busy.” We hustled inside the Tannery Bar and left the wind outside.
​ 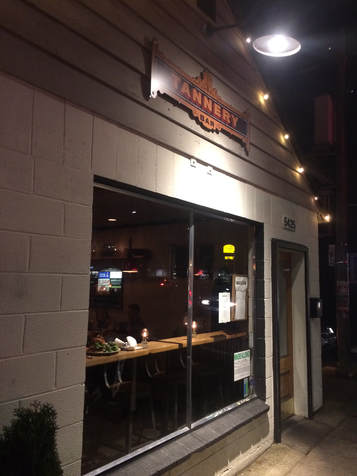 Tannery Bar is pretty easy to miss. A tiny, windowless building except for the front, and directly across from a supermarket and small shopping plaza. The exterior is extremely minimal, with a few uncovered outdoor tables for smokers, people-watchers, and folks with warm coats. Inside, however, we were greeted with an air of warm, unpretentious rustica.

​The restaurant is long and shallow, with a small open kitchen behind the bar and long tables of communal seating. There are a few stools at the window where no one in their right mind would sit- simply because it puts you right in the way of passing patrons and servers.

Emily and I get seats at the far-end of a table, underneath antique tools and oil lamps. My back is to the main thoroughfare, so I try to sit as close to the table as possible- I’m keenly aware that not everyone is used to saying “Behind!” when they are slipping past someone, and as wonderful as the kitchen smells, I’d rather not be wearing anything from it. 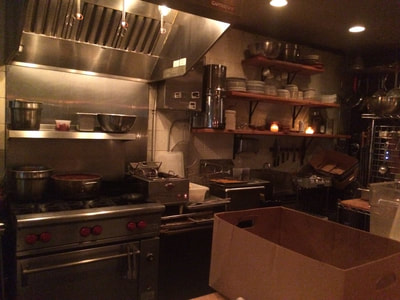 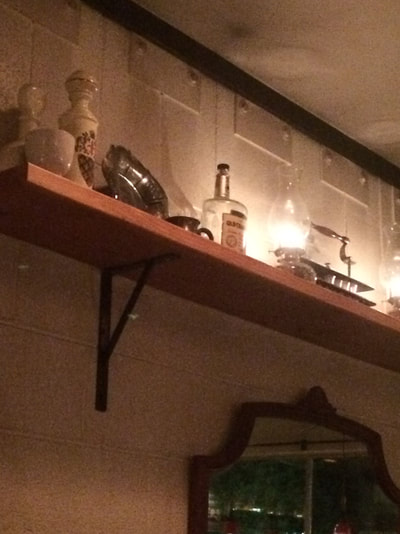 The menus land, and the first order of the night is drinks. The cocktail menu is fairly straight-forward- mostly house riffs on old standards. There’s a Dark and Stormy featuring blackstrap rum and orgeat… a White Russian featuring orgeat, housemade coffee liquor, and dusted nutmeg…at least three different kinds of Old Fashioned. They are VERY proud of their orgeat, apparently. In the end, Emily chooses a “Jessie’s Girl”, and I decide to play it straight with one of their “shot and a beer” combos, the “Rebel Rebel” (now apparently called “The Bowie”)- a bottle of Rebel Czech lager and a shot of Rebel Yell Reserve Bourbon.
Next, food. Most of the menu items are definitely meant to go with your drinks, and- like the cocktails- are thoughtfully-executed iterations of pub standards, like their fried Brussels sprouts with Cholula aioli, cheese board, and Tannery fries. Emily selects the Hangar Steak, medium rare, and I go for the Tannery Burger- an eye-catching little monster of locally-sourced beef wrapped in goat cheese, topped with bacon and caramelized onions. To lead off, though- a pretzel.
Not just any pretzel, though- a FRESSEN pretzel
​ 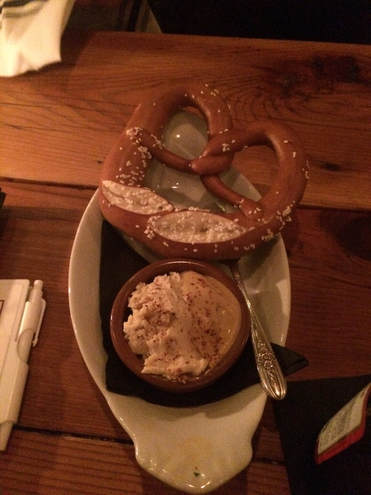 Fressen is a local bakery that specializes in old world German baking.
My colleague Victoria spent several years working for them, including twisting such pretzels as these, following recipes that had to be updated to remove certain classic ingredients- like lye. One day, while we were discussing tattoos, she revealed that she’d decided her first tattoo would be the first baked good she’d made one thousand off. Consequently, there is a soft pretzel somewhere on her body- I did not feel it was professional to ask where.

All of this is to say that, these pretzels are GOOD. The people who make them have a long history of making good pretzels, and Tannery has chosen to serve them up warm with malted mustard butter and dijon.

Emily and I have lived near Philadelphia most of our lives. We KNOW something about soft pretzels, and… my God, YES. After the first bite, we fall upon that curvaceous little wonder like a two-person plague of locusts.
​
Shortly after the vacated plate is removed, our entrees land- both Emily’s steak and my burger are accompanied by a small escort of the handcut fries and the house salad. The salad is a simple, but pretty little number- dolled up with hemp seed, sprouted almonds, shaved parmesan, and poppyseed cider vinegarette.
​

Now, Emily and I are practically obligate carnivores- I make no apologies. We both are also ridiculously fond of fries in all their expressions, Emily especially.
The salad went first- for BOTH of us.
This is not to say the burger and the steak weren’t excellent- they absolutely were. My burger flowed with the mingled juices of onion and tender beef on a grilled brioche bun, and Emily’s steak was grilled to perfection. Something about that salad, though, made it positively addictive. Tart. Crunchy. Tangy. Sweet. Salty. It was all there, and all ours.The entrees evaporated quickly, and we were ready to finally achieve our stated goal- an analysis of the Fernet Branca Chocolate Pie.
They were out. The chef only makes so many a day, and it had been 86’d.
Disappointment would be an understatement.As we donned our coats and prepared to slip back out into the windy night, Emily happened to catch a glance at someone’s menu.
“Hey, you know they do brunch?”
“Huh… well, I guess we’re doing that next.”
​“Possibly a good idea.”
__________________

I was never a big “brunch” person. Brunch was a thing for Sundays, Mother’s Day, and people who slept late enough to want their breakfast at 11am- so just the experience of walking back down Burnside toward Tannery was fairy odd. I had looked over the menu, however- and I was told there would be waffles. From my first Eggo to the finest Belgian- I am a round-heeled, loose-walleted pushover for waffles. 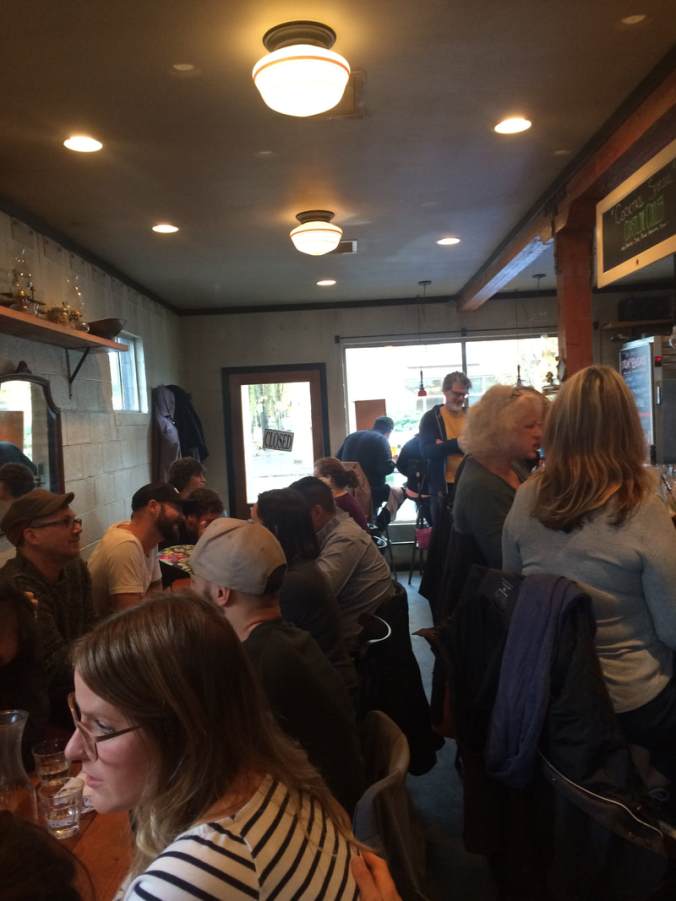 If the nightlife at Tannery was a little busy, brunch was pandemonium. Above the din of voices and clattering dishware, a waitress tells us we can sit at the bar or grab seats all the way at the far end of the last table, where a couple had vacated just minutes before and had yet to be cleaned down. Given the choice between a face full of busy kitchen or looking at a couple of crumbs for a few minutes, Emily and I decide not to be picky.
The menus land, almost unnecessarily. Emily gets a gussied-up Irish coffee called “Muddy Waters,” I get a Bloody Maria (a Bloody Mary made with tequila instead of vodka), and we make our selections.
We had looked over the menu- and we wanted waffles.
Emily went for the Morricone- a dainty little waffle topped up with mascarpone, Lomo ham, argula, a poached egg, and an apricot grappa glaze. I decide to just rub my face right into the stereotype and go for the Timberline- a waffle served up with country fried steak, a fried egg, homefries, and smothered in sausage gravy.
​

As you may expect, there were no survivors. Emily’s Morricone was sweet, luscious, and complex- and mine was the beautiful mess of meat, starch, and gravy that I rarely indulge in but always have a spot in my heart for- usually the small space NOT occluded by fat deposits after such repasts.
Again, the Fernet Branca pie was raised… but we decided it must wait for another time. Both of us had had quite enough, and I didn’t need MORE in my gut to waddle uphill back home with.
​

The post-shift. A long day of work, a long walk home, and I’m on my own. This review had waited QUITE long enough. It was time to get the last piece of the puzzle that is Tannery. I’d had their dinner. I’d survived their brunch. The goal post was now in sight as I unbuttoned my wool coat in the door.
“Hi there- just me tonight, and… do you have the pie?”
“Let me check…. Yep! We got some!”
“… A piece of that and a White Russian, please.”

​ It’s distinctly more calm in the dining room on a Tuesday evening. Only two people manning the tiny kitchen, and a single server pulling triple-duty as waitress, bartender, and hostess. I slip into the nearest stool at the bar and watch the cook casually peel potatoes and stir a pot of chili. The waitress buzzes about, and I wait for my cocktail and pie.

The White Russian is quite good. I don’t blame them for talking up their homemade liquors, but I could have easily missed the orgeat if I’m honest. The crafting of the White Russian is beautiful- the cream floats on up in a slash broken only by the occasional ice cube, implying “Some small amount of assembly required.”
At last- three weeks after Emily and I walked through the door for the first time, I finally get a piece of the Fernet Branca Chocolate Pie. It is velvety brown, dusted with powdered sugar, and topped with a loose glob of chantilly cream. 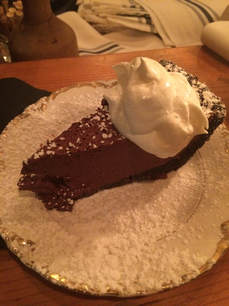 …
It’s not bad.
A very nicely-done chocolate mousse pie on a cookie crust. The herbal bitterness of the fernet riffs on the inherent bitterness of the dark chocolate, and almost balanced by the sweetness of everything else. The texture is cold, smooth, and creamy, melting into a chocolatey goo with every bite. I finish it off with the last traces of my White Russian.
Chocolate pie may just not be my thing.
At least I can finish the review now.

WHEN: Dinner hours are Mon- Sat, 4p to 1a. Brunch is on weekends from 9a to 2p. HOW: Just swing in.
WHY: Because you need a casual, not-too-swanky place with great food for a date night. Or you really want a hell of a good brunch. May the odds be ever in your favor.