Friendly warning- today’s post will be a bit heavy, and it’ll talk a bit about suicide/self harm- as well as the varied reactions to it.

June 8th, one year ago, one of my heroes died.

If you were to ask me, I don’t have too many heroes that aren’t fictional characters. Finding a person that- even indirectly- inspires one to live in emulation of them, to make certain life choices, or who’s work becomes a source of comfort and identity is pretty profound, and it happens to me rarely.

It’s one of the reasons that people who pipe in with “Jeez, they were just a celebrity, get over it/ why don’t we remember REAL heroes/ etc” piss me off. One has to wonder of these same people drive past funerals and scream “Who cares? It’s not like they cured cancer and walked on Mars!”

So when I say the death of Anthony Bourdain affected it me deeply, I’m not being hyperbolic. The fact that he died by his own hand unexpectedly doubled the tragedy, but for those who read Tony’s works and about his life, it was slightly less than surprisingly. Self-destruction and suicide were demons Tony had wrestled with before in his life- and they only ever had to win once.

One year later, in remembrance of his life and legacy, friends and fellow chefs Eric Ripert and Jose Andres established Bourdain Day on the 25th, and the Culinary Institute of America has established an Anthony Bourdain Legacy Scholarship in his memory.

One year later, all of us cooks get to sit down and think of his life and what we can learn.

Some of us, I think, spend their off-time driving past funerals.

In an industry still so brutally plagued by mental illness, stress-related illnesses, masochism, self-destructive behavior, suicide and self-harm, it’s hard not to see Bourdain- beloved spokesman of the field and lover of food- through the lens of his demise.

The world-traveling former line cook and chef, bestselling writer, opinion maker, and seemingly-charmed-life-haver that nearly every cook I’ve ever known idolized… killed himself in a shower in a French hotel, where he was found by his best friend, Eric Ripert.

For some, that fact is a difficult one to swallow- and can even feel like a betrayal of sorts.

“I idolized him, he inspired me, and in the end he gave in to despair. What does that mean for ME?”

“He had everything, and he threw it all away. He wasn’t the hero I thought he was.” 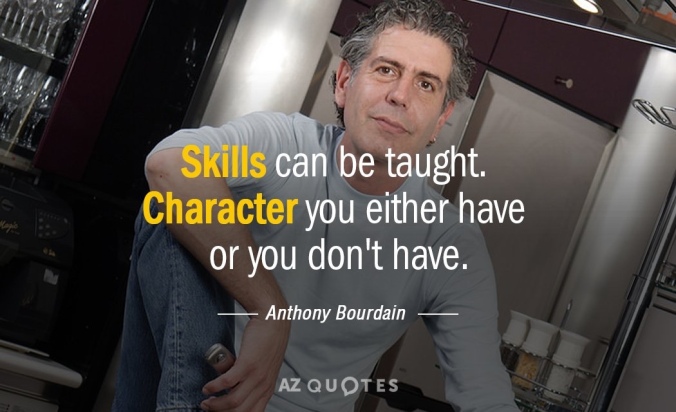 The fact is that, as much as we discuss the “whys” and “what’s” and how-to-stop-its of suicide, something that isn’t as discussed (or at least not more than it’s sensationalized) is what comes afterward.

Those left behind face grief. They face feelings of betrayal and loss and anger and even hate. It’s made even worse in that there’s no real target for that negativity- except for the person they are grieving. No rampaging criminal, no accident of man or act of God, nor even sometimes a specific lifestyle or behavior.

For me personally, Tony’s death came shortly before my own awareness of my mental health. It came at an already dark period in my life, so the nature of his passing wasn’t- at least immediately- a feeling of despair as much as simple loss. “My hero is dead. Throw another shovel of shit onto the pile my life feels like.”

It was not until after I had started to address my own mental health that I could reflect on Bourdain’s death and recognize that- yes. His passing by suicide would be a part of his legacy too.

When it comes to suicide, a difficult fact for those left behind to accept- especially in the wake of their grief- is that it wasn’t about them. It was always about the person, their capacity for the pain in their lives- and that capacity being even momentarily exceeded.

A Writer in Whites 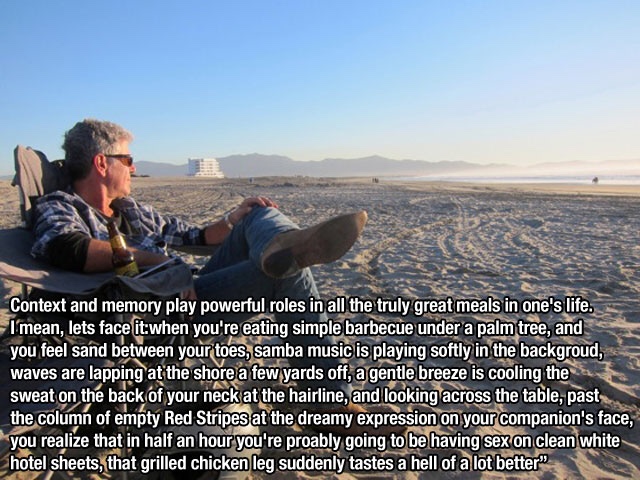 “So what, it’s not even like he was a great chef. He wrote about the life he left, and went on to be famous.”

No, Anthony Bourdain was by no means an especially great chef. He was a decent cook, and a pretty okay chef. He never got a Michelin star in his career- instead, surrounding himself with luminaries in his beloved field.

At the end of Medium Raw, he went so far as to write an ode to impostor syndrome, reflecting on a night surrounded by his friends and thinking “What am I even doing here? At no point in my career would any of these people have ever hired me- and one of them is my best friend in the world.”

Reactions like the one above are less reactions to the man, and more a tribalistic reaction to the legacy Tony left behind- one found behind a typewriter rather than at a grill.

You might guess, this particular legacy is of interest to me. Anthony Bourdain’s work didn’t just convince me to make a career out of the kitchen. It also made me fall in love with food writing, the power of the written word to encompass the appetites of the world- and that I could take a crack at that too.

Every day in the kitchen- just like every time I sit down here to write- I’m trying to do better. Learning from mistakes, mine and others. Constantly refining, constantly working. Tony himself admitted that lounging and retirement were not his style- that he always needed a project.

The fact is, every one of us- cook, chef, writer, critic, grocery clerk- gets to decide exactly what our legacies will look like. We get to devote our time and energy to them- all the time we have for the rest of our lives. It might be a business, a series of books, amazing food and culinary techniques- or it can just be the stories people tell about who we were, and how we made them feel.

No, Anthony Bourdain’s legacy is one of words, not food. But those words inspired others to build legacies of food. They inspired a love of travel, of eating, and of enjoying life.

Tony’s life rippled like a stone in a still pond- and the generations of cooks keep expanding.

The day I got the news of Anthony Bourdain’s death, I was facing a dark patch in my life and career. My workplace of the last two years had begun to feel toxic. I was barely sleeping. I was injuring myself by working out too much, since it was my only method of stress relief. Emily was scared for me- and I was too stressed and scared to be worried for myself.

It all came crashing through in a three-day-long mental breakdown. Leaving that job with no clear progression in sight- no work or stress to distract me- meant that I finally found myself alone with my thoughts.

My thoughts weren’t very happy with me. I paced the apartment, plagued by wild mood swings, paranoia, depression, and listlessness. I was terrified of the obvious mistake I had made, that I had doomed Emily and myself to poverty and homelessness. Emily’s patience was stretched thin- being in an apartment with me made three days feel like a week.

I can’t imagine what were the last thoughts to go through Tony’s mind… but now I can have a vague notion of how it must have felt.

This past week, there were a number of ideas bandied about regarding how to observe June 25th, Tony’s birthday and Bourdain Day. Some cooks just went to work in honor of the man that inspired them. Others suggested eating a cuisine you’d never tried before and letting whoever was making it teach you the story about the food and where it came from.

One of my favorites, though, came from my friend Robert Attwood:

Don’t ‘put out your jackets’ for Bourdain.

Don’t post quotes of his and talk about him inspiring you.

Don’t lament the fact he’s gone, he went out on his terms and lived the life he wanted to live, for better or worse.

Go to work and ask how your staff are doing.

Take care of your brigade, be a shoulder to cry on or a crutch to carry someone through the hard shit they may be facing. Call out shit behaviours (online and off), draw a line in the sand and stand up against terrible bosses and fuckwit owners. Work an extra day so someone can have 1 with their family.

Promote teaching, learning and spread the knowledge of cooking. Share the joy that this trade brings you with others. Show the youngsters there is a better way to move through this craft. Be an example of a better industry moving forward.

Bourdain is past our help and realm of existence.

If you truly want to ‘honour’ him, then lift, build and help create a better industry for all of us. Let’s work towards a trade that is beneficial and welcoming for everyone that focusues more on the people behind the plates than the plates themselves.

Anthony will always be remembered for his writing, his personality, and his storytelling. For us, he should also be remembered for his love of this life we all live, even as he left it behind. His memory should inspire us to not just do better, but create a better industry- one with less pain, and greater love of the craft. Less macho posturing, and more sincerity and care. Less glorifying self-destruction and harm, more standing up to those who make our kitchens toxic- whether out of a love of profit, or some misguided sense of “tradition.”

I’m going to keep writing and keep telling stories- and I’m going to work toward having happier ones to share. The kind that Tony loved to tell… and that I loved to hear.