It’s probably a good thing that I’m trying to work my way into being a writer as well as a baker. Since I was a kid, I always loved telling stories.

About anything that I happened to find interesting.

Storytelling came to me early. “Reading an audience” took some practice and development.

That’s not a bad way to develop though. Too many people get brought up being taught to rein back something that they never know the true power of, and consequently, NEVER learn its power or are afraid of sharing it when they do.

Passion, after all, is very powerful.

It’s beautiful, dangerous, infectious… and lets us be alive.

As Cruel As Children

It starts in us when we are young, good or ill- and it sticks with us all our lives.

As we pick our way through the world and try to figure out the rules of this new game we have to play, we connect with things that make it meaningful- loves, interests, hobbies, fandoms, things that get us excited.

I wasn’t a great student as a kid, but that didn’t mean I wasn’t studious. I must have been because I would positively badger my parents with obscure facts about dinosaurs, or the life of Dr. Suess, or stories I’d read and memorized.

For the most part, my parents were really supportive and encouraged it. Hey, it got me away from the TV and Game Boy for a bit, right?

At school, however, the rules were different.

Think about your own behavior or that of your friends for a minute. If you know someone who, when they get excited talking about something, suddenly “hit the brakes” and make an apology like “Sorry, I don’t know when to stop sometimes” or “This must be really boring, sorry…”

At some point in their life, they were made to feel ashamed of what they love.

At some point in their life, they had just learned what makes them burn… and were told to throw a wet blanket on their fire, instead of taught to build a lighthouse around it. 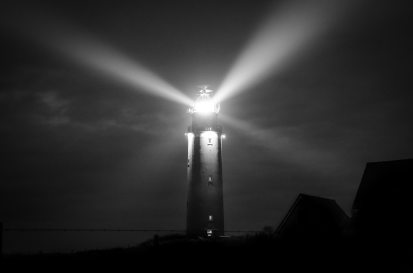 Lighting Up The World

I’ve written a few times before about passion- its place in the kitchen, in being a student, and possessing it in the day-to-day.

One of my favorite stories to tell is when I accompanied my wife to a cocktail party of musicians and music teachers. I hadn’t expected to have much to say to anyone and figured I’d just be following Emily around, but when I told people I was a baker, I was swamped by people who wanted to talk about food and cooking.

Passionate people tend to be passionate about a lot of things.

That’s because passion is energy.

It drives you. It lets you accomplish what you love, tolerate what you don’t, and create what didn’t exist before.

Like energy, passion can be misplaced. It can lead people down destructive paths or blind them to inherent problems.

Additionally, for all its strength and power, passion tends to find its greatest usage when focused through discipline. The light in a lighthouse might be bright, but it’s the lens focusing that light that lets it be seen for miles.

I said earlier though that passion is infectious- and that might be its greatest strength.

Passionate people give others permission to be passionate as well.

“Our deepest fear is not that we are inadequate. Our deepest fear is that we are powerful beyond measure. It is our light, not our darkness that most frightens us. We ask ourselves, Who am I to be brilliant, gorgeous, talented, fabulous? Actually, who are you not to be? You are a child of God. Your playing small does not serve the world. There is nothing enlightened about shrinking so that other people won’t feel insecure around you. We are all meant to shine, as children do. We were born to make manifest the glory of God that is within us. It’s not just in some of us; it’s in everyone. And as we let our own light shine, we unconsciously give other people permission to do the same. As we are liberated from our own fear, our presence automatically liberates others.”

That might be the most alluring thing about creative life– the fact that the people who living just seem to be so “turned on” all the time. They seem to be a bundle of energy- always working, constantly creating, giving their all to the world.

Whether or not we are interested in their works, part of us envies that feeling. Those of us who were raised to stuff our creativity and passion under the mattress look at people reveling in theirs and think,

“If only I could be HALF as passionate about what I’m doing as they are, what could I do?”

The bad news is, as I mentioned before, that it’s not all sunshine and rainbows. “Follow your passion” is a great motivational poster, but pretty brutal in practice.

The good news is that it’s possible- and the rewards are there for you, and for the entire world.

When you seize your passion and share it with others, you invite them to harness theirs.

Get Out There And Spin

On this blog, I’ve covered a lot of heavy stuff- especially recently.

Dealing with stress, burning out, my own mental health- my brain hasn’t been a very pretty place to be as of late.

Perhaps that’s why I’ve been so attached to a particular anime called “Gurren Lagann.”

This may or may not be the background on my computer right now.

If you get a chance, I highly suggest watching the short, 27-episode series. It’s got everything you might expect from a Japanese cartoon- giant robots, attractive female characters, and over-the-top inspirational speeches aplenty.

Wrapped through it, however, is the excellent on-going metaphor that I want to highlight here.

Throughout the series, a major plot element is “Spiral Power-” which powers and allows the pilots to use their giant robots. It is initially described as “fighting spirit” and “belief in oneself,” and later described as the will to evolve in all natural life- the will to struggle, to improve, to move forward and get better.

A “Spiral Gauge” inside one of the robots in”Gurren Lagann”

What does the “big bad” toward the end of the series, the “Anti-Spiral” represent then?

Passion is what makes progressing worthwhile. It lets you suffer the insufferable- because you know you are going to break through eventually.

That why the dork with a knack for stories is writing to you right now.

It’s why the lonely kids became comedians, and the weird, bullied kids are selling out venues worldwide.

So… where is your light?