The bike ride to the cafe is only about 10 minutes on the way there, and 15 or so on the way back because of hills. There’s a certain part of it that I really enjoy- it’s when I

pass by Laurelhurst park. Sometimes I cut through and then I can ride a long-bomb hill right down to the

“BAGEL WITH CREAM CHEESE AND LOX. AND CAPERS.”

cafe. It’s an exhilarating part of the morning. On Thursdays and Fridays, Chris the bread guy is on and usually leaves a freshly-made plain bagel on my work bench

WHERE’S THE GODDAMN LOX. AND CAPERS.

… It’s a good way to get the day started. 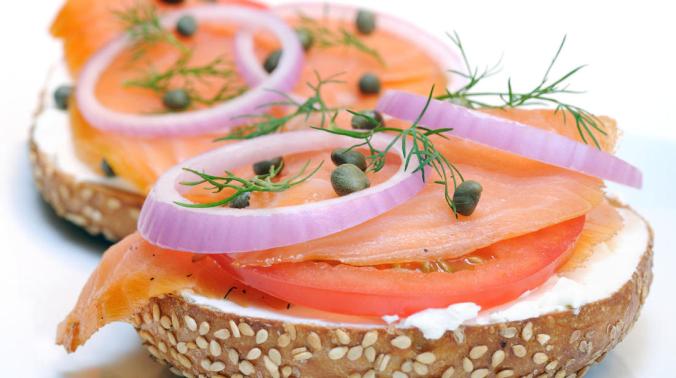 In traditional Buddhism, it is postulated that there are only three real sins, and that all other sins are derived or motivated by these- ignorance, craving, and hatred. While hatred is considered the most grievous and unnatural, the other two are approached with somewhat deeper sympathy and understanding. Everyone is born in ignorance, and craving things is to be expected in an impermanent world. It is only when one chooses to embrace ignorance rather than learn, or when craving is permitted to override morality and reason that they become problematic.

Spiritually, this is excellent advice. In terms of healthy diet, however- not exactly.

craving (n:)
: an intense, urgent, or abnormal desire or longing

Cravings seem to come out of nowhere- like tasty, sadistic mental ninjas bent on hijacking your thought processes and/or evening plans. We only tend to notice or experience them at moments of stress in our lives, or when a specific occurrence reminds us that they exist. This is all by-the-way however, because it doesn’t necessarily explain WHY they happen. Sure, if you’ve just started trying to eat healthy, watching the opening of “Willy Wonka and the Chocolate Factory” might be a bit of self-sabotage- but it’s just a movie, right? It’s not connected to your gut, and doesn’t explain why suddenly you feel like you could DEMOLISH a Hershey bar- or why you did and now simultaneously feel amazing but also sick with yourself. ​Well, yes and no.

YOU SHALL NOT WIN THIS TIME, GENE WILDER!
Cravings come from a weird mix of physical and psychological influences. According to Christen Conger at HowStuffWorks.com, differences exist across gender and culture with women craving sweets more often and men craving savory. American women tend to crave chocolate, where as Egyptian women tend to crave more pungent, flavorful dishes.​
Much of this tend to punch holes in a popular health-food theory about cravings that claims that they are our body’s often-misunderstood attempts to tell us we are lacking in specific nutrients, and that the foods we crave are what we have grown to associate with providing them. For example, that Hershey bar you are dying for is your body’s way of saying you need magnesium. Several folks have come up with handy charts that are intended to gently nudge you towards healthier options- instead of chocolate, for example, look to nuts, fish, or leafy green salads. 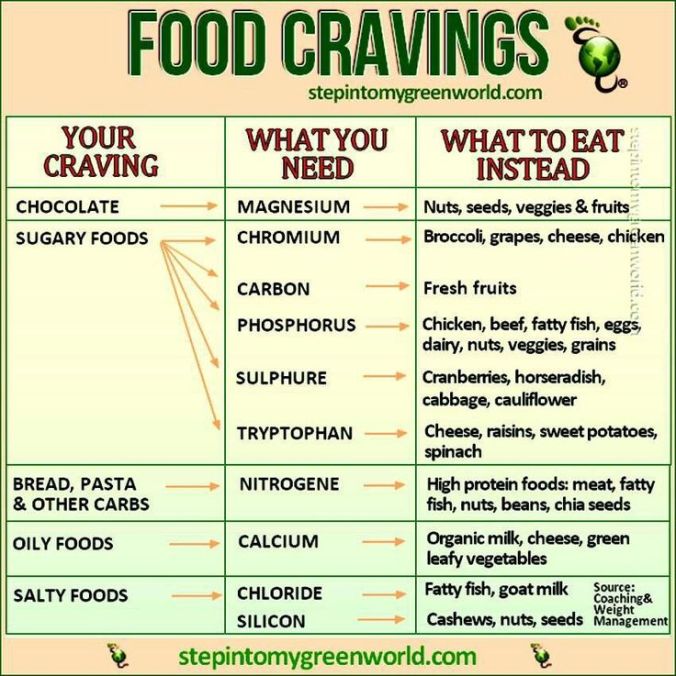 From stepintomygreenworld.com
Some folks have had success with this theory- others find that it’s like drinking Coke when you want champagne. You want a Tolberone, not f***ing tuna. The flaw with this theory is, simply, its premise. According to nutritionist Karen Ansel, “If cravings were an indicator of nutritional deficiency, we’d all be craving fruits and vegetables.” Instead, through the use of fMRI scans, studies have found that the areas of the brain that light up during an intense craving are the ones responsible for memory, emotion, and stress.
As I’ve mentioned multiple times before, right after the sense of smell, taste is the sense most closely associated with memory, and when you want to replicate the feeling of a certain memory- family dinners, the security of childhood, your first date with your partner- you can’t do much better than “eating your feelings.”In writing this blog, I went ahead and did a little self-analysis. I thought back and tried to recall everything I’ve craved in recent months. For the purposes of this, I chose to define a “craving” as a desire for a specific food that lasted longer than a day unless sated. Passing by a candy shop and suddenly wanting “something sweet” didn’t count- it had to be a bit more specific than that.

With the exception of sushi, you might notice the general trend associated with cravings surfacing here as well- most of the things I’ve craved are rich in fats, sugars, or carbohydrates. None of them offer a particular range of nutrients, putting one more hole in that “body talking to you” theory.
What they DO offer, however, is a pretty obvious psychological profile of stressors and desired emotions in my life.
First of all, each of these things have specific associations in my memory:

Given these origins and associations, it’s not hard to connect the motivating emotion behind them: 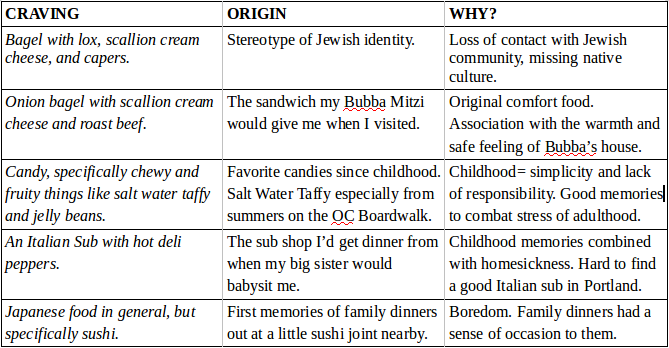 All of this leads to the big question that people really want to know about cravings- how do you beat them? How do you get rid of them? As a baker and a cook who has been living a healthy lifestyle for the last 6 years, how do I get rid of my cravings?

Sorry to break it to you all, but… I don’t. More often than not, I give in.

Here’s the deal though- cravings are real. As we’ve shown here, what you are craving can let you in on your emotional state- you cannot and should not be able to just “shut it off.” By understanding your cravings, you can assuage them intelligently and from there decide what the next steps for your mental health should be. If you find yourself going after comfort foods more often, try to figure out what in your life is making you crave a feeling of comfort. If you want something from your childhood, try picking up a favorite book or movie from back then.

When it comes to food, I tend to give in with a healthy dose of self-control. I get that bagel- and make it my lunch for that day. I’ll pick up some jelly beans or salt water taffy- but only enough for me to enjoy in THAT MOMENT, not so much that I’ll store it at home.

The Italian sub? I suffer with it and cry myself to sleep, clutching a bottle of olive oil and a picture of New Jersey. It’s REALLY hard to find a comparable sub here in Portland.

That all said though, ultimately it comes down to self-control and self-knowledge. Nothing comes from nowhere- and if you are really REALLY wanting that cupcake.. see if you can find someone to split it with.

Anyone else kinda hungry?