With the coming of fall, a lot of new stuff arrives. Polos and t-shirts give way to sweaters and scarves. (I’ll turn in my hoodie when you take it off my corpse,) Lemonade becomes apple cider, Pumpkin Spice becomes a way of life, and of course, school starts. Which means a new batch of students will be starting in culinary schools across the country.

A year or so ago, I wrote this open letter to recent pastry grads. With all the articles and open letters floating around the internet written by older cooks and chefs, I realized that their message was all pretty much the same. Every one of those letters I read talked about how “kids these days have no motivation” and the industry was way harder back when they were starting, and you need a thick skin and so on and so on.

A lot of it was true, and had very valid advice- but the tone, in general, I found really down and grim. I figured I would write one that came from someone NOT with long years of experience, but was young enough to remember when he was a graduate. Someone who will tell you what the culinary industry is like NOW, not thirty years ago.

So if you’re a new culinary/pastry student (or thinking of becoming one), this is for you.

We all started somewhere…

Ok, so you REALLY want to become a cook? You sure you didn’t hit your head walking past the school, or were trying to find your way to another class? A group of angry older folks didn’t grab you off the street, stick you in baggy pants and a white coat, and shove you into the kitchen mumbling something about “keeping enrollment up”?

Good. You already have at least part of what will make you succeed in this field- a reasonable amount of insanity. Inspirational speakers will call it “passion,” or “love of the craft,” but it’s all in how you spin it really. I’ll talk about that later.

Unless you have already worked in kitchens for a while, you are likely to feel overwhelmed. I entered culinary school in 2009-2010 at the ripe old age of 24. I already had a bachelor degree to my name, working as an EMT and a nurse’s aide in a hospital the entire time, and I STILL felt like I was in too deep at first.

That will pass after the first few weeks, and should kick back in at the beginning of almost every class. If it doesn’t, you aren’t being challenged. If you feel comfortable, you’re not doing anything new.
​
A good school will have rigid standards of behavior, attire, and performance. You will be made to crave perfection in yourself and what you do, feel disappointment in anything less, and have abject disgust for anyone or anything that tries to cut corners.

Most European culinary schools have a work experience requirement before you can enroll- either a certain amount of time in the industry or a letter of recommendation from a chef. Most American schools do not. This is because, at the end of the day, putting a culinary school on your resume will tell your employer the following:

“This person can exist in a working kitchen with a low likelihood of killing/injuring themselves, others, or burning the building down.”

No, you are not going to graduate and suddenly become Emeril Lagasse, Thomas Keller, or Alice Waters. If you have enrolled, or are considering enrolling, in any school that gave you that pitch, turn the hell around and leave right now.

You are truly better off finding a job in a restaurant as a dishwasher and learning everything you can while earning money- as opposed to paying out the nose, learning a lot, and THEN becoming a dishwasher or prep cook with 4 years of student debt hanging around your neck.

It will give you a small community of like-minded people to support and help you, so make sure you support and help them. You can find that in the industry as well- in the best of circumstances they will be your coworkers. We cooks are pretty tribal- if you can hold your own, you’re one of us. Just don’t flake out.

It will give you a captive audience to work with and experiment on. Take advantage of this as much as you possibly can- trying out weird stuff in the working world is expensive, and chefs/owners that will offer up their bottom line to let you screw around are rare.
​
It will give you teachers, ones that have a vested interest in seeing you improve and succeed. You can find them out in the industry too, if you decide not to go to school, but there is a major difference. Your chef educators at school want you succeed, and have decided to DEVOTE TIME to drilling you, grilling you, and raking you over the coals because it’s their job to make sure you learn.

The teachers you find out in the world likely have 5,000 other things they need to be doing other than answering your questions- but they might anyway. This is because the culinary world is about mentorship- it’s about that older cook taking time he doesn’t have to show the new kid the ropes, in the hopes that one day, they’ll be good enough that he can take a day off and confidently say, “It’s alright- the kid can handle it.”
Whatever teachers you find- if they are taking the time to teach, you find the time to listen. Respect them, pay attention, and don’t forget them when they are done. Show up early and stay late to learn. Be the kid that can “handle it.”

The truth is, once you graduate, unless you immediately decide to start your own business or restaurant, you are NOT going to be a hired as a chef.

Whatever kitchen first hires you, it will likely be menial. You will get little respect, no one will care what you did in school, or about your skills any farther than the job at hand. The culinary world is still a meritocracy. Competency is key, and as a new guy, you will receive less respect than the dishwasher. That’s because the dishwasher has been there 15 years, doesn’t call out sick, and doesn’t bitch about it. You will have to demonstrate your ability by working at least as effectively, and as hard, as everyone else.
School is the training ground for learning how to work as a team. Take it seriously, carry hard, and don’t be a dick about it. That will earn you more respect more quickly than memorizing the menu of La Pyramid.

By the way- BE GOOD TO THAT DISHWASHER. He almost always knows everything, and will help you out. Every single place I ever worked, the first person to help me get my footing in the kitchen has been the dish/prep crew.

Got all that?
Everything I said just now is completely true- but there will also be cases where it will seem like complete horse-puckey.

You might even find yourself in a worst-case scenario: a job you despise, with a boss that discourages and grinds you down, will teach you nothing, and- worst of all- will make you question whether you even want to keep doing this.

Places like that are rare, and you’ll need to trust your gut on steering you around those. Some you can stick around and navigate through them. Others you’ll wind up quitting and calling a wash.

You’ll be able to identify them pretty quickly, though- because you are insane.

You will do all of this, because you love food THAT.

You love getting your hands dirty and coming up with something pristine and beautiful.
You love creating, almost as much as you love giving your creations away to feed people.
You love cooking, it almost feels more eloquent for you than speaking- as though you can pour your heart and soul into a bowl of soup more easily than you could a poem.
You love the adrenaline of a rush, the close quarters with like-minded people- a team that becomes family as you sweat through the day together.
You love the isolation of being the first person in in the morning, or the last person cleaning at night-
And you love that, so long as you are able, you can go anywhere on earth, know there is more to learn, and that everyone is happy to meet a cook.

You are absolutely crazy to want to do this job- and that’s why you’ll be just fine.
So strap in- you’re in for a hell of a ride. 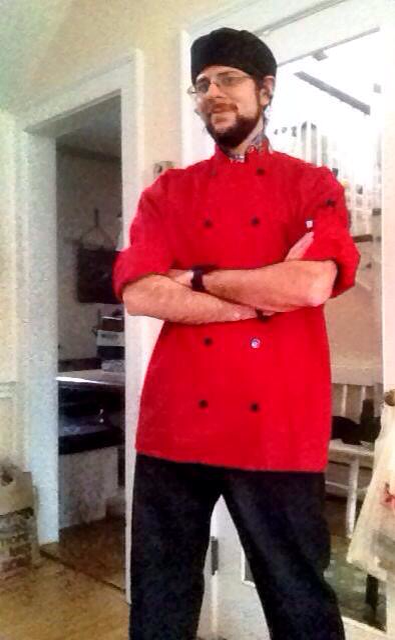 Best of luck and