When you notice a small corner bar on a normally bustling strip of the city open for a few weeks, but then closed on Friday nights and Saturdays, one of the first things you start to wonder is “…who’s idea was that place?”

The small, narrow corner space- sharing its block with Zach’s Hot Dog Shack, the locally-famous Por Que No?, and a nondescript Tibetan tchotchke shop- had for a short time been the “Hawthorne Public House.” I’d looked in a few times in passing, and that’s precisely what I did. I passed. A whistle-clean bar on the inside, with big TV screens… that was closed at 4pm every Friday.

Passing by, regardless of day or hour, the joint was always empty or closed, and nothing ever compelled me to walk in.

One day, the windows were papered, the sign was down, and another Portland bar vanished like a fart in a Jacuzzi.

A couple months later, my friend Pete caught up with me at the beer cart next to the cafe. He’s a writer for Willamette Weekly, and besides just casually talking to folks about where they like to go for the best ___, he’s one of my go-to sources for new places to try.

“Oh, yeah that’s… oh wait, yeah! Someone finally did something with that space? I wondered what happened to it after the Public House went out.”

“… There was something there? Anyway, it’s called The Cavern. Go there sometime- one of the best places for meat in the city. Get the pork belly skewers, and spring for the mousse dip. It’s so raunchy and weird.”

If you want to be noticed, you’ve got to make a little noise- having a whiskey list and a knack for the carnivorous helps too.

I do my best to get out and explore. When it comes to a constantly mutating food scene like Portland’s though, the more eyes on the ground the better- and I trust Pete’s. The man has a knack. Not just for finding the newest, hottest, and edgiest- but the GOOD. He has little patience for mediocrity- or anything that irritates him, actually.

So a place with good food, good drinks, and music that DOESN’T make a critic like Pete want to jab forks in his ears? That’s worth looking into already.

I first wandered in last spring and… yeah, they REALLY improved on this place. The previously beige walls were painted a grungy black, with a bizarre mural of a skeletal hand holding up a star near the tap list. Local artwork rotates through, apparently always with a twisted angle to match the vibe.. 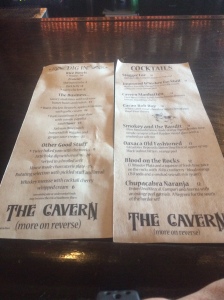 I took it all in from the doorway at first- cozy booths, and despite the bright sun from the large windows, the whole place felt dark and warm.

I must have been standing there a while because the bartender- a large man with a short, slicked hair, faded tattoos and a smile- gestured me in. This was Jason Rocksmore, owner and proprietor of the joint.

Arrayed behind him on the dark wood was a curated pantheon of worldwide whiskeys. In a Southern-style lemonade urn was a curious red beverage over ice, a chalkboard sign hanging around the top simply reading “Hemingway’s Tears.”

Jason slid me a couple menus then started fixing drinks for another patron. The cocktail menu offers classic twists- a mezcal Old Fashioned, a Rob Roy with cherry and chocolate bitters. While I’m pretty sure I’m going to spring for a “Smokey and the Bandit”- mezcal, house orange liqueur, and citrus simple and smoked sea salt- the question asks itself.

“Oh yeah, man! It’s our house sangria- we change it up pretty often in the season.”

He’s already whipped out a lowball and poured me a taste. It’s strong, fruity, and a little spicy from… are those mulling spices? I have no idea, but it’s good. In the end, I do get the Smokey and the Bandit. It’s bright and deep, smoky and clean- a glass of contradictions.

Overhead, the music has switched from Siouxie and the Banshees to the New York Dolls. “Personality Crisis.” Peering behind Jason at the iPad displaying Spotify, I can’t see the title oof any particular playlist- it seems to be a home-brewed mix of Jason’s favorites.

I drink, and we talk. Jason is no starry-eyed entrepreneur. He’s been around the block a few times. A local rockstar himself with his band Stumblebum, as well as a seasoned bartender, Jason wanted a place where folks could come in, chill out as much as they cared to, and do exactly what we were doing- drinking the heart out of the afternoon.

We discuss his kids, science fiction, and the books we’ve read. The sun crawls up the dark walls through the window, and my eyes wander over to the food menu.

“Alright, man. I’m under orders to try your pork belly skewers, and get the… chocolate mousse dip?”

“Oh hell yeah, dude. We got real crazy one night, and decide to just dip the meat in the mousse, and… yeah, you just gotta try it!”

The man in the kitchen, Shig Matthews, was previously at Harlow, a local vegetarian joint. His skills with a hunk of meat can’t be questioned though. The pork belly is sublime, and yes- dipping it in the rich chocolate whiskey mousse is the way to go. That’s another one for you, Pete.

The star of the menu- steak tips with butter beans cooked in red wine- gets you right where you LIVE. The steak is perfectly done, and the rich butter beans just give your belly a hug.

As a guy who is, at best, lukewarm on beans… I friggin CLEARED that plate.

You can’t ignore the past though, and veggies still make an honest appearance. Root veg chips are tossed with honey and thyme. Baked garbanzo beans replace the typical bar nuts, and of course you can get a salad- albeit with lardon, egg furikake, and miso dressing.

The afternoon dies, sunset rolls down Hawthorne, and I’ve gotta get home. This isn’t the kind of bar that would play “Closing Time” by Semisonic, but they MIGHT do some Tom Waits at the end of the night. Not that they’re closing yet, of course.

I wish Jason well and head out. On the way down the street, I whip out my phone and tap out a quick message to Pete.

“Just went, man. Good call. Get those steak tips next time. By the way, ever get down to this other place…”

After all, the more eyes on the ground- and friendly faces in crowded places- the better. At this point, I owe him one.

When: Sunday- Thursday, 4p- 12a. Friday and Saturday, open till 1a. Http://www.thecavernpdx.com for more info and a full menu.

Why: Because you’re still cool, but you don’t want to be in a bar full of kids. You just want a place to mellow out and get wrapped in the music and liquor that makes everything alright.