Everyone’s trying to save a buck these days.

Restaurants, cooks, workers, all of us. Even bakers- ironically- are having trouble making a little dough.

Sadly, when belts get tighter, it invites fewer opportunities to loosen them. You start finding ways to bring in a little cash- and moments when you get to spend that cash are limited to special occasions.

That’s why I’ve been pretty light on the restaurant reviews as of late.

It’s also why I’m writing this one on my wife’s insistence.

It was our anniversary, after all- and she loves watching me be a food nerd. 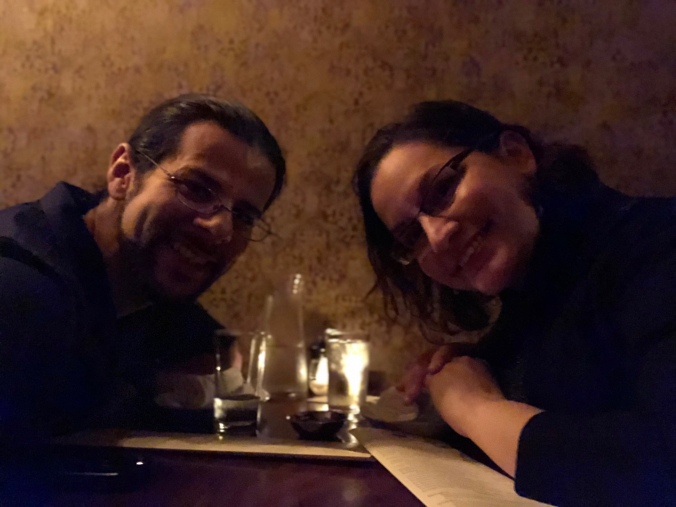 Toro Bravo is NOT new to the scene. It is NOT an up-and-comer. Toro Bravo, the flagship restaurant of Toro Bravo Inc., is proof of a good thing done well.

With its aim of bringing Spanish cuisine and tapas to the Pacific Northwest, Toro Bravo led to the launch of a host of revered restaurants in Rose City- among them “Tasty ‘n Alder,” “Tasty ‘n Sons,” and “Shalom Y’all.”

For our anniversary, though, Em and I wanted to try the original.

As we entered off the street and shrugged off the January wind, I was immediately impressed by how… accessible it was. A warm dining room laid out in old wood and bullfighting-related decor that managed to accentuate rather than distract. An open kitchen on the far side from the door buzzed with activity- but slowly and quietly. We were early for the evening, as Toro Bravo doesn’t take reservations.

Early as we were, though, we were informed that tables for two were only near the door or “in the Alcove.” Perfectly understandable. It’s early on a weekday night. They wouldn’t want a four-top getting taken up by two people making googly-eyes over their drinks.

We opt for the Alcove, and are whisked off to a small side room. Two-top booths are laid out against the wall of a room roughly the width of a bowling alley, and half as long.

Well, we WERE hoping to avoid drafts from the door.

Going through the menu, Emily and I promptly get LOST. We bounce entries off each other until we forget what we’d already said looked good. It’s not quite oppressive- the opposite, really- but analysis paralysis kicks in all the same.

Then our waiter comes up and makes it all simple.

“We have our tasting menu, as well. Tasting portions of the chef’s choice for the night. It’s between nine or twelve courses, for $50 a person- even for two, you’re going to need your appetite.”

Throughout the night, each course landed with a simple, 1 to 3-sentence description before our waiter vanished again, reappearing only to check on the state of our beverages- cocktails which were very well-made riffs on a few classics.

That’s something I’m generally fine with- a classic is a classic for a reason- but there is definitely something a little disappointing about ordering what reads to be a unique experience on the menu, only to take a sip and say “Well, that’s a very good margarita.”

Thankfully, that was (nearly) the end of the ordinary for the night. As Emily sat in our small corner of the Alcove, in a small corner of the restaurant, the conversation evolved from recent events to plans of the future. With each course, our talk paused (a power that good food ALWAYS possesses) and turned to one of the things that brought us together in the first place- being food nerds.

We had fully ten courses worth of our first date.

Spanish Kisses- imagine eating a raw egg yolk, but it tastes like an olive.

The Toro Kiss- their spin on a Devil on Horseback

First came two of Toro Bravo’s “Kisses”- small appetizers intended to be eaten in a single bite. The “Spanish Kiss” was a spherified manzanilla olive, dressed in fine olive oil- a little odd on the tongue, like eating a raw yolk. The other kiss- the Toro Kiss- was it’s absolute opposite and complement. Taking advantage of the restaurant’s house charcuterie program, this Devil on Horseback was presented as house bacon-wrapped date drizzled with warm honey.

Yeilding and light, paired with rich and hearty, in two tiny bites.

Then came the liver terrine. Studded with black truffle, served with house pickles, coarse mustard, and levain bread- rich and balanced. Emily and I generally go wild for fine charcuterie, but this one seemed to get Emily right where she lived. Two years of breakfasts together tell me that, if it can be enjoyed with a REALLY good piece of toast, my wife is there for it.

Next was the Morrocan Tuna.

Moroccan Tuna. History on a plate.

One of my abiding loves of food is how history can be presented on a plate. The close geography of southern Spain and North Africa, the tastes and produce of each, and Moorish presence are proudly on display here. A strip of Spanish tuna is dressed in rose-tinted harissa, offering a smoky/firey/floral palette that paints a centuries-old picture of people in motion before pulling you in. As I ate, Emily couldn’t help but laugh.
“Spicy, smokey, hot… it’s got your name practically written on it, dear.”

So what? I’ve got a type, and that type is NOT what the next course presented- roasted cauliflower with cracked olives and salsa verde. 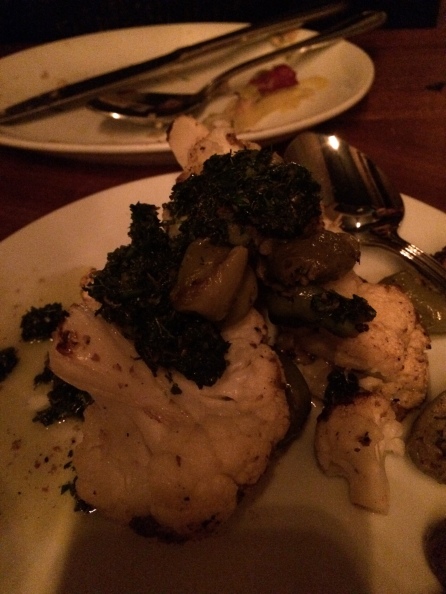 It was Emily’s turn to find her wonderland. While I pride myself on trying absolutely anything at least once, my relationship with cauliflower remains strained. That fact says nothing about the skill of Toro Bravo’s cooks- Emily thoroughly enjoyed it, and I was plenty satisfied picking up the cracked olives that had been tossed through the fresh heat of the salsa.

House Pork Belly and Chorizo on Tostada with Manchego Cheese and Sea Salt. Proof that there CAN be too much of a good thing.

Seared Scallops and Fennel over Romesco- back on track.

The remaining dishes came as a blur. House chorizo and pork belly on a house tortilla with manchego proved oddly the most banal of the night, proving that too much of a good thing can come off as just a bite full of fat. Seared scallops with romesco got things back on track, perfectly cooked and cutting through the previous plate with the romesco’s peppery heat. 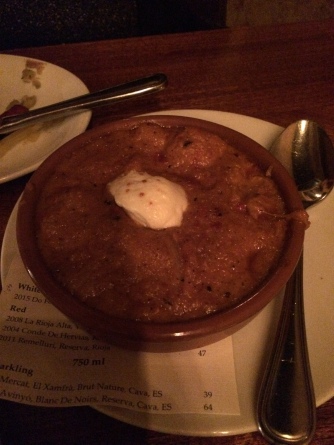 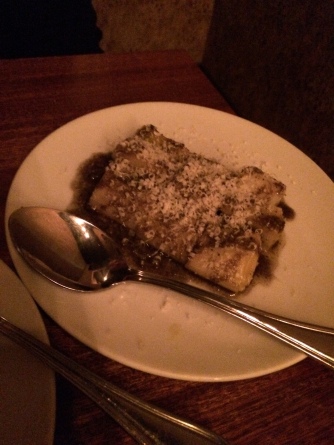 Harissa Stewed Butternut Squash flipped a bird to the winter weather with a simple crock of that spicy/smoky/sweet comfort I love, and a dish of roasted leeks reminded me of Calçotada, substituting salbitxada sauce with grated manchego cheese and a vinegarette made from the ashen outer layers of the onions. All of it a long, gentle denouement to the night.

That is, until the final plate. A knockout punch of peak savory in the form of two pieces of Toro Bravo’s house coppa steak- smoked, with confit potatoes, cracked olives, and caramelized onion topped with salbitxada.

Both of our eyes went wide. THIS was the tenth course- the best saved for last. Every part of that plate was exquisite… except for its timing. We both ate, but fully aware that a LONG walk was needed before we went home. Emily only managed a few bites before hitting the wall.

With the arrival of the check, Emily and I were suddenly snapped out of our food-induced reverie. The ambient music, until then lilting Spanish guitars, had given way to hipper, thumping club music to get ready for the evening cocktails crowd. It was officially a Thursday Night, and things were going to get busy.

As we donned our coats and headed back out into the street, walking off the culinary tour de force we’d just gone on, I got a chance to reflect.

How much I loved the fact that my wife and I could both make dinner out its own entertainment, picking apart and exploring each dish.

How lucky I was to have her in my life, and living in a place that made such entertainment readily accessible.

A good night out, and a good anniversary, in anyone’s book I should think.

When:  Open daily for dinner: 5pm to 10pm, Fri & Sat till 11pm. Reservations are only accepted for large parties early in the week.

How:  Walk in, or visit their website at http://www.torobravopdx.com  to arrange Plaza del Toro, their private event space/supper club.

Why: Because you are feeling something interesting, but classic and intimate, with a lot of flavor and character but no pretense.