I don’t remember WHAT was in that space in the little strip on Belmont, right across from The Liquor Store and the old Zupan’s. I was always going to work, or to one of the other joints in the area- that’s probably a good explanation for why it went out of business. Portland is a thriving, mutating city- eateries and concepts popping up with new trends, and dying just as quickly if they don’t offer something to make people want to help them stick around.
For weeks, paper covered the windows of the old store front. All I saw through slits in the paper was glowing neon in a dark room, a few framed cells, and the already-finished window decals. 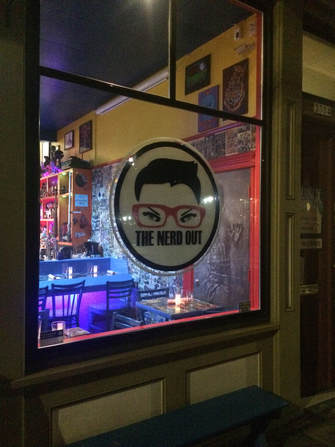 “Huh… a comic book store? That’ll be interesting around here… I should come back when they open.”Well, I was close.
As soon as I saw that the Nerd Out was open, and that it was in fact a restaurant, I knew I needed to stop in. I have always been an unabashed sucker for kitsch and gimmick, and from the menu to the signs on the door, they’d gotten me. As Candi says in “Django Unchained-” “You had my curiosity… now you have my attention.” 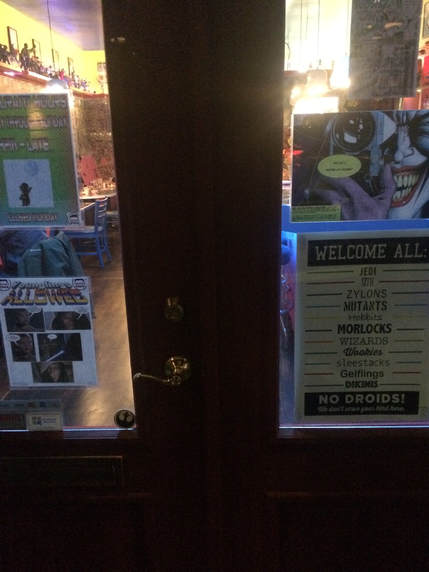 I grabbed a seat at the bar near two men debating the merits of “The Last Jedi.” A young lady with rockabilly makeup and purple hair greeted me and poured a glass of water, sliding a menu toward me. As I sat, there was a quiet pouting sound behind and to my left. A young blonde waitress with her hair in two small buns sighed. “Augh, you’re getting all of them tonight, Aimie!” She sidled around and stood at the end of the bar. “Hello there! Welcome!” She offered a pixie-ish smile, and Aimie (the bartender) stuck her tongue out at her as she continued cleaning glasses. “Sorry Hannah, next time?”

I chuckled and soaked up some more of the atmosphere. Murals of superheroes and movie villains were all over the wall near the bar. Wolverine was apparently playing Magic The Gathering with Batman, Jack Skellington, and Lo Pan from “Big Trouble in China.” The bar tools were stashed in a ceramic pot shaped like Jabba the Hutt. A light fixture made of a Stormtroopers helmet illuminated the menu I should have been looking at.

“The Spider-Manhattan.” “The Sonic Screwdriver.” “The George Romero” Oh my God, they were serious. 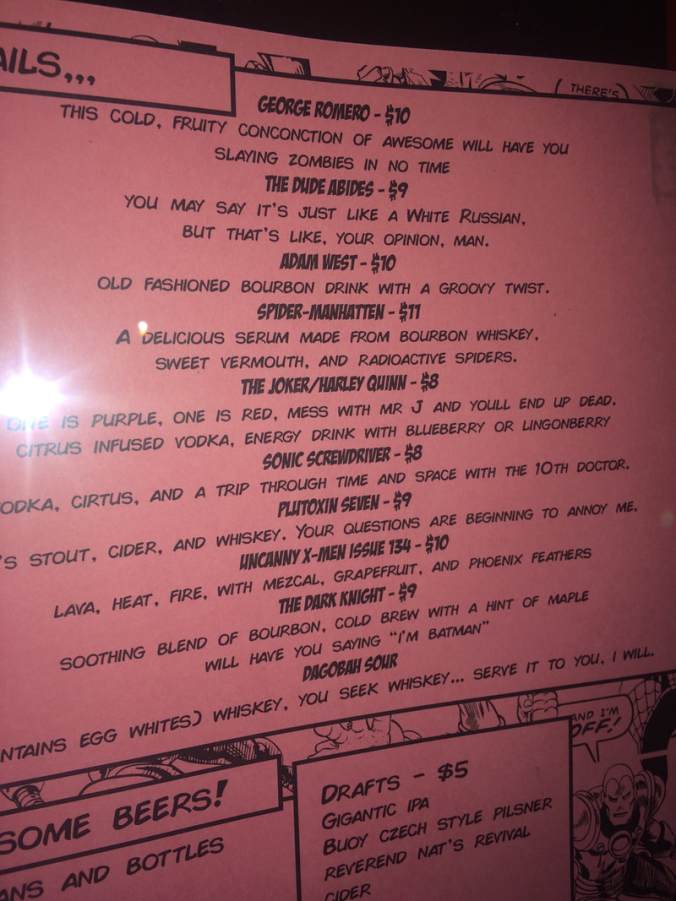 “Anything catching your eye there?” Aimie leaned over and asked after clearing the other guests check.

“Uh, yeah… I’ll do the Spider Manhattan?”
“Alright, one Spider-Manhattan!” Aimie gets to work mixing the cocktail. “You know, I’m not a big bourbon fan, but I like this one. We use chocolate bitters rather than Angostura, and get these REALLY great cherries- not that neon red maraschino crap.”
As the other guests leave, she wonders aloud. “Jeez, never heard so many people argue that much over a movie. You see the latest one, ‘Last Jedi?’”

“Oh yeah,” I answered sipping some water. “There were a few problems I think, but on the whole I enjoyed it.”
Aimie slides the drink in front of me. The Manhattan is excellent- well-mixed and smooth as glass, preferring one of their cherries to a muddled orange peel.“Yeah, I keep hearing that, haven’t seen it myself yet.”
“Well, no spoilers then- but at least it was better than Rogue One.”

An older man comes out of the kitchen at that, “I thought Rogue One was alright.” He is sporting a Rebel Alliance ballcap and an old-school Atari t-shirt.

I’ll spare you the next hour of conversation, where we compare the virtues of recent science fiction cinema, and skip straight to the man introducing himself as Mitch- the owner and “head nerd.”
“I’m glad people are coming in- this is exactly the kind of stuff I wanted to happen here: just folks being able to get a bite and a drink and talk about what they love!”

That is about as perfect a mission for this place as I could ever think of. Everything in the restaurant is geared to spur nostalgia, discussion, conversation, and collaboration among the faithful. Besides decorating the small cafe with his own collection (again, I was half-right that someone’s collectible shelf had exploded,) Mitch even incorporated slide-out power strips under the bench seats so that people could plug in their tech and work on projects together. As we chat, he mentions ideas for trivia nights, cosplay nights, and geek debates – his theory is that it’ll be more fun than doing it online, since it’s harder to be an asshole when you can see the other persons face, and he’ll be acting as mediator.

“Hey, come by again soon! We’re still getting things squared away, and you should totally get something to eat too!”

​A couple nights later, and I’m back. This time I remembered to bring my appetite. As I walk in, I notice there’s a couple additions. A small children’s playcorner has been established, with toys and a comic library. Mitch has young children of his own, and wanted the place to be fun for younglings as well as Master Jedi.
Hannah is off tonight, but Aimie is still behind the bar. She is joined by another older man- this one wearing a black flatcap, a Joss Whedon t-shirt and Doctor Who belt, complete with TARDIS buckle. This is Josh, the “Booze Emperor” and head mixologist. Aimie passes me a menu again- she’s remembered my name.
“Heya Matt- just drinking tonight, or want something to eat?”
“Oh, I’m hungry… hmm.. what are ‘chales?’”

The menu of The Nerd Out is filled with stick-to-your-ribs comfort food, and I’m more than intrigued. Chales are apparently two thick-cut slices of pork belly, deep-fried to crisp and served with flake salt, a radish slaw, and grilled lemon and lime slices for juicing. They are Aimie’s favorite shift meal- and I’m officially on board.
“And uh… to go with that, what’s the George Romero?”
Josh turns and indicates the rum he’s holding. “It’s my take on the classic Zombie cocktail- I layer it up a bit so you can mix it up yourself.”
“Sold- I could go for a boat drink.” 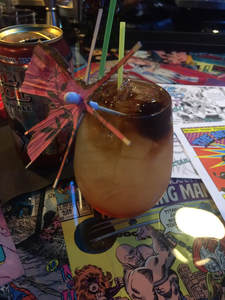 Josh whips around and mixes up the technicolor concoction. “Of course, it’s a boat drink, so it needs an umbrella,” he remarks as he harpoons a cherry. “…but it’s a George Romero, so you know something has to go wrong in paradise.” Plunking the small umbrella in the cocktail, he sets it down on the bar and proceeds to light the umbrella on fire. Josh grins and pushes the drink towards me. “I could tell you the smoky smell from the burn lends something to the flavor of the drink- but let’s be real, it’s just kinda cool.” Weirdly, the smoke DID help the flavor a bit. Note to self: “Create a cocktail called ‘Flaming Zombie.’”

Another night, another bizarre string of conversation- this time about my wife’s art and fanfiction- until the chales arrive. 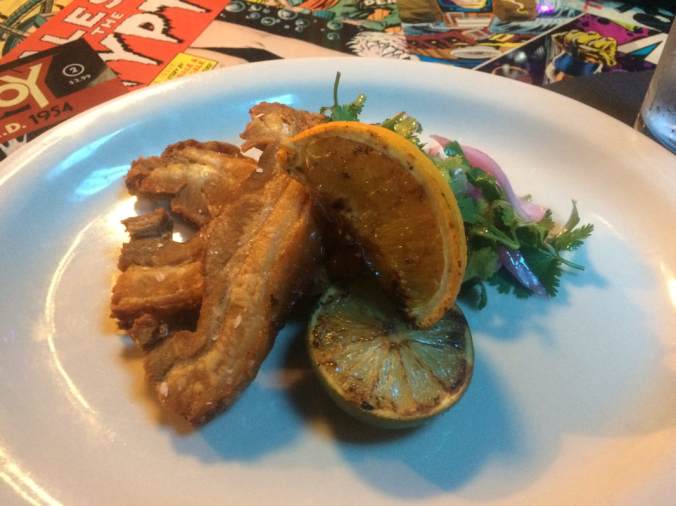 Thick, crispy, fatty, and addictive. A squeeze of the grilled citrus, and all that was well is made even better.
Mitch pops out of the back again. “Oh hey, Matt! How’s the chaques? Good, right?” I nod in emphatic agreement as I chomp down the last bit of the radish slaw- the bitterness and tartness slicing through the fat coating my tongue.

“Yeah, that one’s my favorite- through our vegetarian French Dip is really good too.”

Back up a second- VEGETARIAN French Dip Sandwich? I check the menu- sure enough, “French Onion Dip- caramelized onions, apples, cheese, on local bread, with mushroom au jus.”
Oh yeah, TOTALLY getting that next time.

After all, I’ve been surprised by sequels before- and this one is definitely called for.

WHY: Because seriously, that casino side quest was total BS, and Leia Poppins? Really? Hold on, let’s get a drink and sort this out, see it REALLY went off the rails when….