Fridays are the days I get to myself, and I like to take that seriously.
​​
As much as I love spending time with my wife, getting out on my own and putting pavement under my shoes is a necessity. I can walk the up-and-down streets of Portland, breathe in the wet air, and be alone with my thoughts. When I was job-hunting, almost every day was like this- me, a heavy coat over a tidy suit, and a briefcase full of legal-sized hope looking for my next answer. 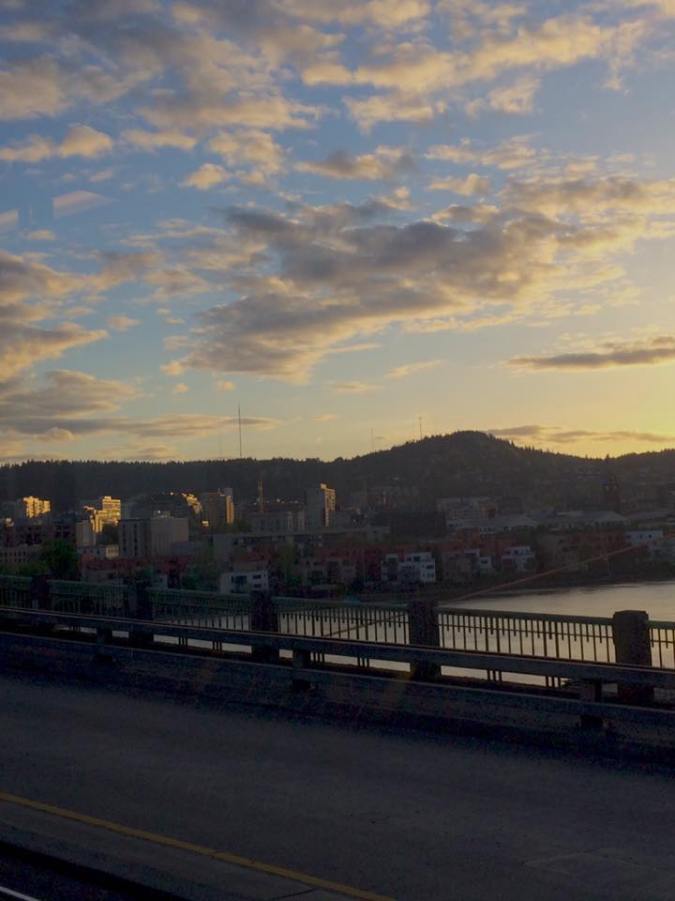 Wandering by myself, even in familiar places, is when I feel the most independent and responsible- there’s no one but me to answer to, and I’m the only one to do what needs doing.

Last Friday night, that was writing. Thanks to my friend Gwen and her brother, I’ve finally got a reliable blogging machine to work with. I have at least two pieces to get done, and they’ve been weighing me down for a while. That’s the problem with being a writer, even a part-time one- you eventually need to sit down and write something. Gwen and her brother gave me a hell of a hand with that- one new machine, and one less excuse to get things done. One bar review, one blog entry.

I’d spent a few hours of the afternoon in Case Study, my favorite coffee shop in West Portland. The air and light in the shop is great, but their lack of outlets is a little problematic. I remember back in New Jersey how some cafes, keenly aware of the irritating interplay of logistics and social interaction, put signs on tables and spaces near wall outlets, gently reminding customers not to be rude if someone needs to sit with them to plug in their laptop. The signs were generally appreciated- sometimes having to mind a written sign makes being mindful of others a little easier. I don’t know how well they’d go over in as touchy a place as Portland.

A few hours in, Case Study was closing. I’d gotten some important work done, particularly for the new Patreon, but it wasn’t quite the writing I needed to do- one bar review, one blog entry. The blog I had a good idea for, but the review- I was stuck. Emily and I had been to one great place that I took plenty of notes for, and even had a couple paragraphs written out, but the revelation of missing a couple crucial points meant a return was needed- and I couldn’t rightly publish it without them. I mused on this as I packed up my stuff and pulled on my jacket, then strolled out into the misty night.

I needed to drink, and I needed to think- and there was a little bar nearby I’d wanted to give another shot. 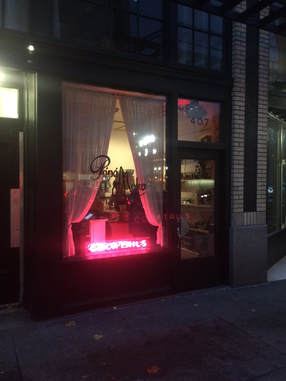 ​Pepe le Moko is as nondescript as a cocktail bar can get. The bar itself is in the basement of the Ace Hotel, on the edge of the Pearl District and Downtown. Their front is a single large window and door, maybe 8 foot by 10. Stepping off the sidewalk, I was immediately met by the hostess’ stand- and the kitchen. 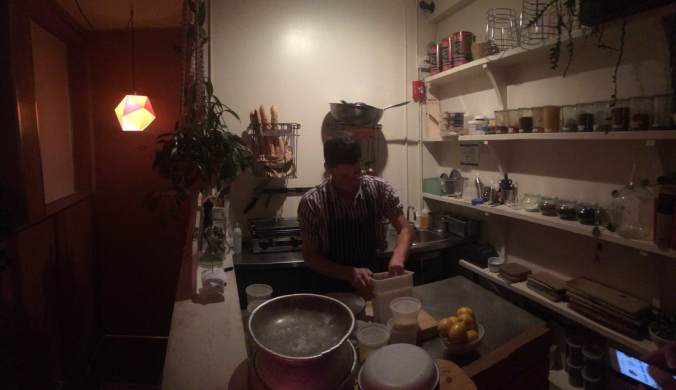 In the small kitchen, DIRECTLY in front of the door, a young kid stands busily shucking oysters from the decoratively-arranged pile on ice behind him. I notice the odd, homey feel of the small space- not what I expected from a cocktail lounge. There are labeled jars of spices on the shelves. A small sink, a panini press, and a lowboy are his only major equipment. As I wait for the hostess to return to the podium five feet from him, I notice there are a few books on the shelves as well- Harold McGee, a book on French entertaining… and one that is upside down. I carefully pull it out and read the cover- Bradbury’s “Farenheit 451.” The kid chuckles- he’s used to people wondering why that’s in a kitchen. No reason, apparently- a small red book just looked nice there.

In a few minutes, the hostess returned and guided me downstairs to the bar proper. I’d been here once before, and taken by just how “straight-out-of-a-film-noir” it felt. The entire bar was in a round, vaulted basement room- almost like a stereotypical bunker. The bar itself was along one long side, and I was amazed that how such a small, straight room could give the impression of intimate alcoves and corners to hide in. Low-lighting and jazz completed the atmosphere of seduction, sedition, and secrets. It was busy, and there were a few loud groups of friends at the extreme end of the room, but after a while their voices faded into the noise of the place.
I was parked at the corner of the bar, and the hostess whisked away my coat and hat. 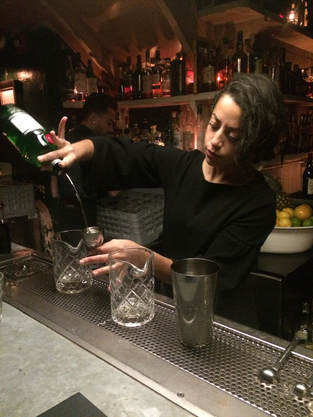 Behind the bar, the young bartender is slinging orders like a champ. Her fingers run over the bottles on the speed rack, clutch the right one without looking, and dose each of her cocktails with a small flourish. Her face is stoic until she sees me look over the menu. The cocktail list is short- house versions of classics, a couple virgin mixes. Some light snacks toward the bottom are book-ended by oysters by the half-dozen and their charcuterie and cheese boards.
“Hi, what can I get you?” A small smile as the bartender busies herself between tickets.
I decide to go for their house martini- with an olive- and an order of the deviled eggs with bacon jam. Order received and entered, she is back to work.

As I watch, I realize exactly what it is I love about watching bartenders work- and it’s not just the large amount of delicious liquor being handled.
A bar is a very small, very open kitchen- not unlike the oyster shucker kid upstairs- but with the expectation of a show. As I watch the bartender fix my drink- and then five others simultaneously- I can’t help but notice how perfect her mise en place is, and that it HAS to be. Every bottle is placed back in the exact same place. Every tool, mixing glass, shaker, stirrer, strainer, quickly washed and returned to the exact same place so that the next time she needs it, there’s no need to look.
Sipping at my perfectly chilled martini, I can’t help but silently enjoy the show until my eggs turn up- carried down the narrow stairs by the young shucker himself, grinning with pride. 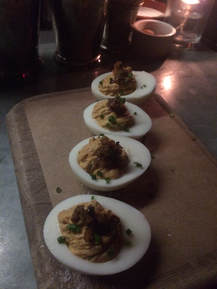 The deviled eggs are cool and delicious- the bacon jam offers a punch of sweet smoke and fat against the smooth, Dijon tang in the yolks. Deviled eggs are an old favorite of mine, and I can’t help but smirk slightly at how the yolks were portioned back into the whites- slightly runny, rough mounds. I figure he used a pastry bag, but with no tip. It’s a small thing, but perhaps the use of a smallish French star tip would make it look a little cleaner. All the same, the eggs quickly vanish. 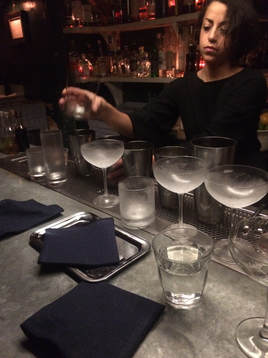 Five cocktail orders come in, get lined up, get knocked out. A few minutes later, there’s no trace of them.
As a server grabs up the last, the bartender notices my lack of martini and eggs. “How was everything? Need something else?”
A quick glance over their spirit list brings to mind an old favorite- Booker’s Bourbon. I ask for it straight up and neat, and what else I should be getting food-wise. She’s got a minute- “Hmm… I really think we have the best oysters and charcuterie board in town.”

Charcuterie and bourbon. That settled that. One of my abiding regrets is that, when I was in culinary school, I didn’t get a chance to take the charcuterie class. If I had, I’d probably still be heavy, and there’d be fewer pigs in the world.

The kid is back in a few minutes, bringing down the board. “So, you want to know what everything is, or just be surprised?” The excitement in his voice is palpable when I ask for the full tour. 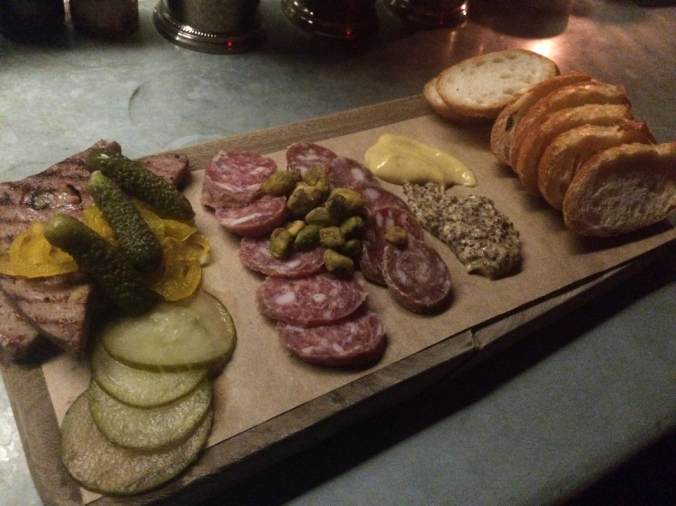 “Oh man, alright! So here’s some Hazelnut Honey Pork Pate I grilled a bit for you, with some pickled vegetable… two kinds of salami from Olympia Provisions, they’re local… and then two kinds of mustard and a baguette. Enjoy!”
Maybe he doesn’t get a lot of people asking for that, or at least not people taking a real interest. Either way, I guess I made his night.

The pate and pickles are definitely the star of the platter to me. They’re sweet, nutty, and fatty- cut by the brine of the pickles and the assorted mustards. Olympia Provisions always does good work, so that wasn’t such a surprise. The pate on the baguette, however, paired up with the eventual arrival of my Bookers, put me right back where I needed to be.

The food vanished, the check paid, and my coat recovered, I ascend the stairs. I’ve got a heart full of food, and a head full of the kid’s joie de vivre, and the bartenders laconic precision. On my way out, the kid is back on oysters, shucking them diligently.

“Hey, great job tonight, man. Everything was wonderful- how long you been at this job?”
“Hey, thanks! Um… only about 6 months, really. I’m still pretty fresh, but I like it. It’s good food, and good ingredients, you know? I worked at an oyster bar for a while before, but I like this better.”

By the time I had my hat on, I had an idea.
By the time I got to the train, the review was written in my head.
It just needed the rainy night, the precise mise en place, and the love of food Pepe le Moko had to offer beneath street level.

So… what’d you think?

WHEN: Pepe le Moko is open daily, 4pm to 2am. Their food is excellent, but small portions- consider getting dinner somewhere else and ending the night there, or stopping by before a movie.
HOW: Drop in, or call (5030 546-8537 for reservations.
WHY: Because you need a place to vanish for a little while, and you just want to fade out for a little bit with class.